We were able to visit the newly re-opened The Hive store in Glorietta were smartphones and tablets are classified not by brands but by their operating systems. So far they offer Samsung, LG, Acer, and ZTE on the Android section while the last of the Nokia-branded Lumia phones and tablets from Acer and Asus on the Windows section and lastly Blackberry smartphones on a separate section.

And then we gazed upon the LG G3 Beat, a newly locally released smartphone from LG which has the same looks as the flagship LG G3 but lower on specs. Let’s take a look!

The 5-inch display on the LG G3 Beat makes it the “mini” version of the flagship LG G3. It looks a lot like the G3 in every way but nowhere at par with the specs. That doesn’t mean it is a slouch. The 1.2 GHz quad core processor from Qualcomm delivers smooth performance with almost rare to zero lags. 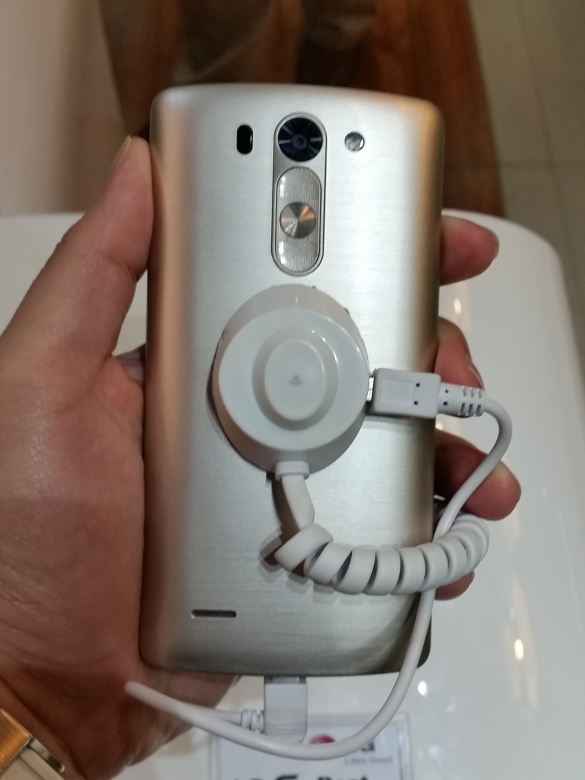 Unfortunately, the model we have here does not have LTE capability but we understand why. The P13,990 pricetag might go up if LTE will be offered here. Nonetheless, the HSPA+ connectivity of Globe and Smart is generally consistent and has more coverage than their own LTE service.

The display is fairly decent since it is an HD display. Playing games and watching videos will still be a delightful experience. We have not tested the camera but we were able to navigate through the camera app. Everything looks nice and clean just like we’ve seen on the LG G3.

Yes, P13,990 may be a steep price for many of you because you can the same specs from other brands at a cheaper price. But remember guys this is LG. This company is behind those beautiful displays we see from Apple’s iPhones and iPads. LG has received praises from abroad with its new design concept for its smartphones. And lastly, we think this phone can last years than some of the brands we see now.