My family and I have been planning our Seoul trip for months now but since its our first time there, we don’t know how everything works at the Korean Embassy when it comes to applying for a visa. When our visa got approved, I was contemplating on what smartphone to bring to review and use it as a daily driver.

I have been wanting to own a Windows Phone, so I bought a Nokia Lumia 530 a few weeks ago, Unfortunately, I’ve posted a review of this smartphone already. And then I remembered that Cherry Mobile released Windows-powered devices recently. So, I decided to buy one a day before I left for Seoul. I’ve used the Cherry Mobile Alpha Luxe for a week now and here’s my review. 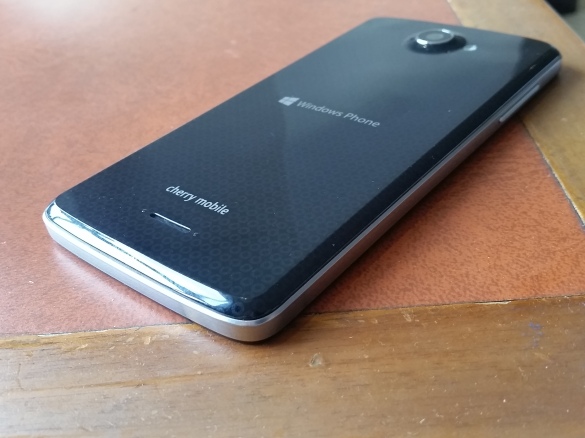 I was a little bit surprised about the phone’s design because it looks very familiar. It really looks a lot like the Cherry Mobile Omega Icon which we reviewed a few months back. I wish that the back panel would be in matte finish so that it wouldn’t attract fingerprints and smudges. Comparing it to my Samsung Galaxy S5, it is a little heavier but in a good way. It feels so solid in the hand. One area that Cherry Mobile improves a lot with their products.

Cherry Mobile also retains the 720p display of the Omega Icon to the Alpha Luxe. It has ambient light sensors that automatically adjusts brightness level of the display depending on the lighting conditions. I just find the display too bright when I use the phone in a dark room despite the auto brightness settings are turned on. Nonetheless, the display is just stunning and I do like screens with cooler tones too.

Just like I’ve said earlier, the Cherry Mobile Alpha Luxe is a Windows Phone device, not Android. It is an operating system developed by Microsoft for smartphones and tablets. This operating system is now becoming popular in many markets in Asia and Africa. If you are coming from an Android smartphone, there’s a little learning curve here. Operation is quite different with Windows Phone compared to your Android or iOS device. But one thing I love about Windows Phone is fluidity even on a low end hardware. Android smartphone (even locally-branded ones), have this occasional lags that might be a bother to some while iOS devices, although very smooth and lag free, is very expensive. Windows Phone is the solution. You can get a fast and smooth performance without shelling out cash too much.

The only downside of it is the lack of apps. But personally, all the apps and games I need are on the Windows Phone Store – Facebook, Twitter, Instagram, Facebook Messenger, Viber, Asphalt 8, Temple Run, Angry Birds, Zombie Tsunami, Spotify, Click The City, Easy Taxi, Microsoft Office, and Swarm. Notable apps in iOS and Android that I love like Dead Trigger 2, Clash of Clans, Grab Taxi, Gmail, and You Tube are still not present in Windows Phone. One feature that also stands out on Windows Phone is Maps and Here Maps. These apps are only exclusive to Windows Phone. Looking for a nice restaurant around Seoul is easy thanks to Here Maps. It helps you locate restaurants or stores near your location. These features are also present in Android and iOS but it is more polished and functional on Windows Phone.

The 8 megapixel rear facing camera is a decent performer. Pictures with good lighting are clear but it lacks color vibrancy. I think that photo quality can be improved using Camera 360. Yes! The popular camera app on Android is also available on Windows Phone!

Here are some of the beautiful places in Seoul using the 8 megapixel rear camera of the Cherry Mobile Alpha Luxe!

Free WiFi is very accessible in Seoul. There’s just free WiFi everywhere and damn its fast! We usually reach up to 10Mbps download speed using Seoul’s free WiFi service provided by the government. So, I didn’t bother subscribing to Smart’s All-Day Surf Abroad promo. What for, diba? When I returned to the Philippines last Saturday, I inserted my personal Globe SIM to test the phone’s HSPA+ connectivity. I got the usual 3 to 5Mbps download speed. Not bad!

Do not underestimate the phone’s 2,000 mAh battery. With my heavy usage the phone lasted 7 hours with 15% battery life left. Our heavy usage includes, heavy use of Here Maps, watching my favorite shows via I Want TV app for 2 hours, taking a lot of pictures, calls and texts via Viber, Skype and FB Messenger, playing Asphalt 8 for an hour, checking social networking sites, WiFi on all the time, GPS on,  auto brightness and use of Bing Translator while talking to Koreans. You can stretch that if you keep your brightness level low and turn off WiFi when not in use.

If you are looking for a value for money Windows Phone, forget the Nokia Lumia 530 (which is priced the same as this phone) or even the Lumia 630. Now that Cherry Mobile entered the Windows Phone arena, Microsoft Mobile (Nokia’s new brand name) should come up to match the price of the Alpha series. So far, the other Alpha smartphone, the Cherry Mobile Alpha Style (P2,999), is the cheapest Windows Phone on the planet, literally.  The Cherry Mobile Alpha Luxe offers more features that are not present in low end Lumia phones – HD screen, bigger display, bigger RAM, and better camera quality for only P4,999. One advantage over Android smartphones with the same price and specs – lag free. Is it time to switch? We think so. 🙂