Globe, on the other hand, retaliated and is now offering the Huawei Ascend Mate, a phablet with a 6.1 inch screen, free at a lower My Super Plan 999.  Just like any other plan from Globe,  this is fully customizable where you can manage your call and text freebies montly and even choose your preferred lock up periods from 6 to 30 months.

This is the actual picture of the Huawei Ascend Mate I’ve taken from Globe Store in SM Mall of Asia. 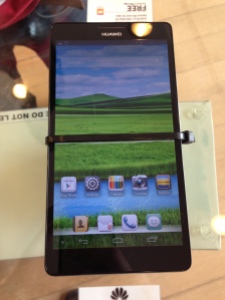 If you are going to buy this unlocked, the SRP is P16,990. One gripe is its lack of LTE although it has HSPA+. Based on my experience Globe has a good HSPA+ network. It is far better than their LTE network which is very limited and slow. If you prefer LTE head over to Smart and get the Samsung Galaxy Mega 6.3 which is LTE capable. But if you find Smart’s offering a little over your budget and HSPA+ is fine with you then get the Huawei Ascend Mate.

A good friend will be getting an Ascend Mate and I will be reviewing it. We heard that the battery life is awesome.